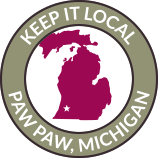 The Village of Paw Paw frequently has local events and activities that you can volunteer for, sponsor and/or participate in. With events such as the Wine and Harvest Festival, the Grape Lake and Santa Run 5k runs, parades, car shows, concerts, and art fairs, there is something for everyone to enjoy. To stay up to date with all the happenings around Paw Paw, the DDA provides a calendar with frequently updated information on the next up-and-coming events. If you require any more information about events in Paw Paw and don’t see the contact info that you need, reach out to us on our contact page and we will help provide you with the answers you need.